On February 12, Expedia (Nasdaq: EXPE) announced it had entered into a definitive agreement under which it will acquire Orbitz Worldwide, Inc. (NYSE: OWW) including all of Orbitz’s brands (such as HotelClub, CheapTickets and Ebookers), for $12.00 per share in an all-cash $1.3 billion transaction. Both companies own a portfolio of travel booking websites. This is a second big acquisition of Expedia in only two months which seeks new ways to defend against the biggest competitor Priceline and possible new entrants such as Google.

American Airlines was the company that first introduced online booking in the late 1970s granting American travel agents access to its SABRE reservation system. Later, the access was also extended to AOL members and in 1990s the system was rebranded as “Travelocity”.

In 1996, Microsoft launched a small brand called Expedia Travel Services hoping to persuade customers to book holidays online. At the beginning, it was not a success since only few houses had internet access and most people were reluctant to the idea of buying their holidays online using their credit-cards. Nowadays, nobody thinks this idea is crazy anymore and Expedia (sold by Microsoft in 2001) has become become the biggest player in the online travel retail sector.

In 2013, the online travel agents had combined bookings of $278 billion, according to Euromonitor. In America, 43% of total travel sales are executed online and 45% in Europe. Much of the remaining slice is taken by business trips handled by specialist corporate-travel agents.

Online travel is an industry in which size of the business is very important. The scale of Expedia and Priceline, the two biggest online travel agents, allows them to sign up more hotels and negotiate better prices than their smaller competitors.

Moreover, this is a business that requires heavy spending on marketing to retain customers attracted with expensive sales promotions.

To stay ahead of the competition, the big online travel agents had to develop mobile applications that allow costumers to book their travels from smartphones and tablets. In fact, it is expected that by 2017 over 30% of online travel bookings value will be made on mobile devices.

The main threat for Expedia and Priceline is represented by direct booking, especially for flights. The reason is that over the past few years, costumers have become increasingly likely to book flights directly on airline websites, rather than through online travel agents. This trend has also been fueled by a boom in metasearch tools such as “Google Flight Search”, “Google Hotel Finder”, Hipmunk and Hopper, which make it easy to compare prices. On the other end, Expedia and Priceline accounted for approximately 5% of Google’s advertising revenues in 2014 and probably it would not be convenient for Google to “cannibalize” them. 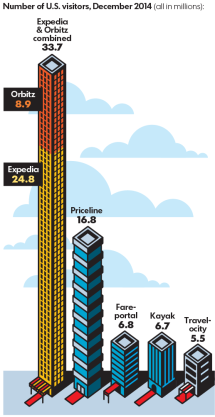 In this highly competitive industry, the cash cow has been lodging. About 19% of hotel’s bookings are made via online travel agencies. However, the lodging industry would like that percentage to fall and hotels try to lure more customers to their own sites by offering perks like free breakfast, free Wi-Fi and free loyalty points for customers who book directly.

Despite the fierce competition, there continue to be advantages to booking with online travel agents. For instance, last-minute airfares on online agents’ sites are often cheaper and package deals can reduce costs.

The past few years have seen a significant increase in the competitiveness of the online travel site industry. New types of competitors have emerged, notably including Google and Airbnb, and hotels and airlines are increasingly managing bookings through their own websites. Recently, hotels, which are by far the biggest revenue generators for online travel sites, have drastically reduced the commission they pay sites to 16% from 21%. Not surprisingly, this has led to a strong consolidation trend in the industry, as exemplified by Expedia’s purchase of Travelocity for $280 million earlier this year. Hence, the merger under consideration first and foremost appears to be a logical continuation of the effort to strengthen the position of existing online travel websites.

Another significant motivation for the deal is the talent Orbitz would bring into the combined firm. As the Expedia CFO Mark Okerstorm puts it, the heavy competition among employers has led to a scarcity of the high-quality talent which Orbitz seems to possess. Hence, Expedia will benefit in the short-term from an influx of talented programmers, marketers and designers.

With the Orbitz acquisition, Expedia would become the biggest player in the travel retail area gaining a market share of more than 6%, just ahead of Priceline’s nearly 5% share. That seems to be another driver for the acquisition, as airlines and hotels will likely lose leverage in negotiations with Expedia’s sites. Hotels will be under pressure to list their rooms on the sites because of their reach, which will further increase the combined company’s customer base.

Orbitz’s properties would still operate as separate brands within the Expedia portfolio although Orbitz’s hotel inventory would be linked to the Expedia platform thus enabling Orbitz to market Expedia’s wide array of global hotel properties. As Orbitz would increasingly use Expedia’s platform, it would be able to offer hotel rooms using Expedia’s economic model, which according to Okerstrom would represent a significant revenue opportunity. Furthermore, Okerstrom said Expedia would be able to achieve $75 million in synergies from the deal, and Expedia would generate an additional 75 cents per share in earnings in 2015, depending on when the deal closes.

Both companies agreed on a price of $12.00 per one Orbitz’s share paid fully in cash, for a total deal value of $1.34 billion ($1.6 billion including net debt). Boards of Directors of the companies have approved the transaction, which is now subject to approval by the shareholders of a majority of Orbitz’s common stock. Qatalyst Partners gave a fairness opinion to Orbitz and has recommended voting in favor of the merger. The market gave his approval to the deal. Shares of Orbitz leapt nearly 22% to $11.72 while those of Expedia rose more than 14 % to $89.57.

The proposed transaction is all-cash and Expedia has planned to finance it through the existing liquidity sources and new debt issuance. They expect to achieve synergies in the order of $75 million on a full-year run rate basis. With an adjusted 2015 EBITDA of approximately $165 million and synergies of $75 million, the deal is expected to add $0.75 per share to Expedia’s adjusted EPS on an annual run rate basis. More financial details about the will be disclosed after the deal has closed.

In a conference call with analysts, Expedia’s CFO said that there are break-up fees on both sides. He played down the possibility of antitrust issues, arguing that the players are diverse and new companies might enter the market (Google paid $700 million for the purchase of ITA Software in 2010). The CEO acknowledged that they have faced competition in acquiring Orbitz (Bloomberg had previously reported that private equity firms and Internet rivals had also expressed interest).