Pfizer’s acquisition of Hospira, the M&A wave in the healthcare sector still far from settling down

In February 2015, Pfizer announced that it wants to acquire its smaller rival Hospira to make Pfizer the leading producer in the biosimilars sector, a high-growth niche sector focusing on lower cost biotech pharmaceuticals.

The chart below shows that pharmaceutical stocks significantly outperformed general markets up until Q3 2015. The healthcare M&A market has mainly driven this upward trend in the equity market. Indeed, with more than $270 billion of announced transactions in the first nine months of 2015, healthcare companies have been regularly under the spotlight throughout the year. However, political pressure, peaking in a tweet from US presidential candidate Hillary Clinton, who proclaimed: “Price gouging like this in the drug market is outrageous. Tomorrow I’ll lay out a plan to take it on”, took away gains from the beginning of the year and called into question the sustainability of the trend. Some companies, which rely heavily on acquisitions to grow – such as Valeant -, have suffered larger losses than competitors following the tweet, but overall the impact was significant.

As shown in the table below, there have, however, been several outperformers of the index, especially in Europe. 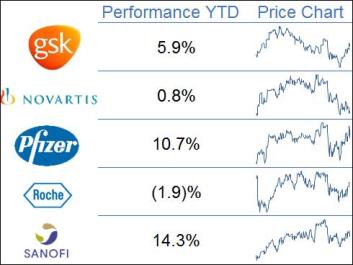 We will focus on Pfizer, which has recently announced the successful completion of the acquisition of its smaller rival Hospira in a $16 billion deal that closed in September. The deal helped Pfizer beat third-quarter expectations and lifted its outlook for the year, as the company benefits from new drug sales following the acquisition.

The deal was announced on February 5, 2015. On July 30, 2015, Pfizer Inc. received the green light from the European Union regulators. On August 21, 2015, the US Federal Trade Commission gave clearance for the pending merger. Despite all the regulatory approvals, the deal closure was conditional on Pfizer’s divestitures of some sterile injectable drugs, which were designed to prevent share price rises and protect the research and development of drugs. The post-clearance waiting period expired at the beginning of September 2015 and the deal was closed on September 3, 2015.

Pfizer Inc. (NYSE:PFE) would buy Hospira Inc. (NYSE:HSP) for $90 a share in an all-cash transaction. This represents a premium of 41.9% over the closing price of $63.43 on January 31, 2015. Therefore, the target enterprise value of Hospira has been estimated at approximately $17 billion.

Pfizer’s share price rose from a closing price of $31.25 a share on January 31, 2015 to $34.87 on February 12, 2015. This represents a gain of approximately 11.6%. The stock has been pretty volatile in the following months, mainly due to high global economic uncertainty and comments by presidential candidate Hilary Clinton about a much needed clampdown on excessive premiums charged by pharmaceutical companies on their drugs. The share closed on November 3, 2015 at $34.99.

The positive reaction from markets following the deal announcement seems to suggest that investors believed this acquisition to make strategically sense both in terms of synergies and additional revenue streams from growing sectors where Pfizer’s presence was still limited.

After the failed $120 billion bid for AstraZeneca and the talks with Actavis, Pfizer has been looking for another potential target for acquisition.

Pfizer once has been the world’s leading pharmaceutical company with its blockbusters such as cholesterol fighter Lipitor. However, expiring patents and competition from the generics segment made Pfizer lose approximately $3.5 billion in this year. To adjust for these losses, Pfizer has started to focus more on the biotech segment where there is less low-cost competition. However, nowadays biosimilar drugs constitute a competition, since there is high cost pressure on the health system and there is a search for cheaper alternatives to the costly biotech drugs.

This deal will transform Pfizer into the leading player in the emerging market for lower-priced biotech drugs.  Hospira’s product line strategically complements the one of Pfizer and will add a growing international revenue stream. “Hospira’s business aligns well with our new commercial structure and is an excellent strategic fit for our Global Established Pharmaceutical business, which will benefit from a significantly enhanced product portfolio in growing markets,” said Pfizer chairman and chief executive Ian Read.

Through the transaction, Pfizer receives a leadership position in the sterile injectables business, which is an important and fast growing segment. The market size of this segment is estimated to reach around $70 billion by 2020.

In addition, there is a significant expansion of the biosimilars business with a broadened portfolio of marketed products and pipeline assets, which will benefit from Pfizer’s best-in-class capabilities in monoclonal antibody development and manufacturing. The global market for biosimilars is estimated to be approximately $20 billion in 2020. This industry-leading medication management systems business is a complementary business that benefits patients and healthcare systems through improved accuracy and productivity in clinical care. Pfizer is now able to use its commercial capabilities, global scale, scientific expertise and manufacturing to maximize the global potential of its enhanced portfolio of sterile injectables, biosimilars and medication management systems.

The transaction is expected to create value for shareholders by delivering incremental revenue and EPS growth in the immediate future. Furthermore, the deal is expected to be immediately accretive to adjusted diluted EPS upon closing. According to company sources, there will be $0.10 – $0.12 accretion to adjusted diluted EPS in the first full year after closing with additional accretion anticipated thereafter.

Moreover, the deal is expected to bring approximately $800 million of yearly cost synergies.

← Fintech: a jewel in the crown
BOILING SUMMER IN THE BUILDING-MATERIALS INDUSTRY →