Technology, Media and Telecommunications division presents an article which tries to better understand the two biggest players in the ride-hailing industry, Uber and Lyft, and establish a correct point of view on the upcoming IPOs that are likely to be scheduled between March and April 2019.

It first describes the core businesses, finding valuable comparisons; it goes on with the respective expansions into new markets and opportunities and concludes the companies’ analysis with a brief introduction to the financing rounds, giving an idea of the evolution of their equity valuations, and possible data on rates of growth of revenues.

The two are ultimately contextualized in terms of the IPOs by assessing the motivations, goals and points of competition that can arise during the process.

Since 2009, Uber develops, markets, and operates a ride-sharing mobile application that allows consumers to submit a trip request. Unfortunately, although being described for its ‘remarkable success’ and ‘enormous influence on the world’ by Goldman Sachs’ CIO George Lee, Uber has yet to show profitability and isn’t expected to do so for at least three years.

Uber’s core service is their on-demand transportation app, which has brought a revolution in the taxi industry. Uber’s key role is to connect so called driver-partners to riders through their app which serves as a platform for the entire process ranging from requesting a car to reaching the passenger’s destination. Hereby, the drivers are not Uber’s employees, but partners. This is the reason why Uber claimed several times to be a technology or service provider rather than a transportation company. They collaborate with drivers of specific vehicles that meet certain requirements regarding size, age and type. As a return for the supply of riders, Uber charges a commission from 20% – 25% of the total amount which is an important source for generating revenue. Additionally, Uber’s business model also includes receiving money from promotional partnerships where Uber gets paid for putting at disposal their customer base to cooperating brands. Moreover, Uber Technologies as an enterprise has actively diversified their product range to other areas such as food delivery, freight booking, transport of patients and electric bike rentals. Uber did not just expand their service range but also the ­­areas they serve: as of November 2018, Uber is covering more than 700 metropolitan areas worldwide.

Uber has successfully launched its food delivery service UberEats since 2014. Additionally, Uber has projects in bike-sharing and scooter-sharing with the acquisition and deployment of Jump Bikes for $200 million this year and with the recent deployment of an electric scooter service in Santa Monica. Furthermore, Uber has been burning hundreds of millions of dollars in its Autonomous Vehicle program and its trucking projects which aim to develop Self-driving technology for both cars and trucks. The Truck research has been recently let off despite acquiring Otto in 2016 for $680 million. It now focuses on its Powerloop project which aims to cut loading time for trucks. Finally, Uber is also rumoured to work on a short-term staffing business called UberWorks. 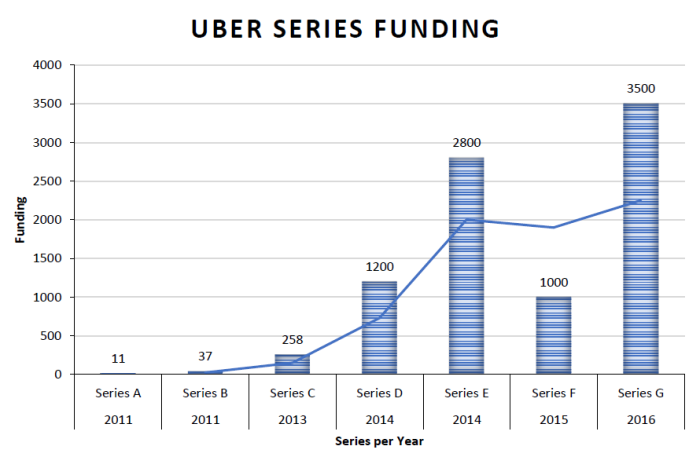 In June 2018 Lyft announced that it was worth $15bn after its newest financing round. In contrast to Uber, most of Lyft financials are essentially unknown. Company is mostly operating in US, with the only other establishments in Ontario (Canada) and Toronto. Thus, working towards IPO, Lyft positions itself as a multi-functional business designed for the North-American market.

According to data gathered from anonymized credit and debit cards in the USA and analyzed by Second Measure, Uber appears to have 70% of ride-sharing revenues, leaving a hefty 28% to Lyft.

Despite the big gap, Lyft has proven to grow faster, adding 2 percentage points since the beginning of 2018, boosted by the recent AV scandal of the bigger competitor, triggering a slowdown through the famous #deleteUber on social media. 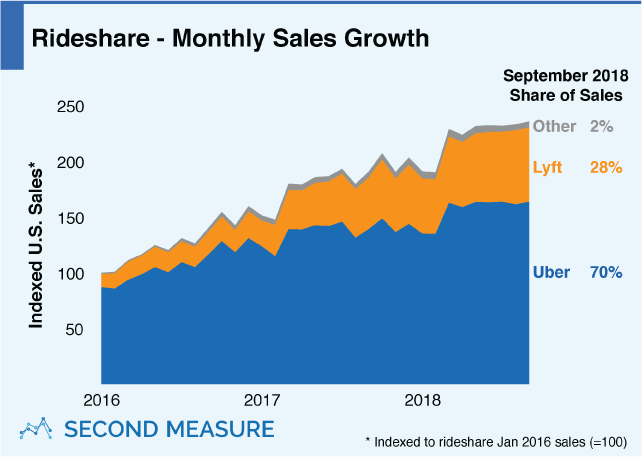 Driven by the dream of establishing themselves as all-purpose transportation apps, both Uber and Lyft have enlarged their main activities with respective strategic acquisitions and investments into bike-sharing and creations of fleets of scooters.

Following the entrance of Uber through its investments in the fastest growing bike-sharing and scooters provider Lime and the acquisition of Jump, Lyft went on acquiring Motivate in June 2018, which estimated that 80% of bike-sharing trips in the US went through its system, as reported by the Financial Times. Lyft then introduced its own scooters in Denver, Colorado, in September, aiming at a business that is deeply attracting investors, with scooters startups recording multi-billion dollars valuations.

Lyft was also significantly involved in the AV industry where it made some significant moves in recent years. In 2016 General Motors invested $500 million in Lyft and two companies agreed to work on an on-demand network for autonomous cars. In May 2017, Lyft signed a deal with Waymo, a self-driving technology developer in San Francisco, and gained a competitive edge over Uber which was experiencing legal issues, as reported by NY Times. In September 2017, Ford announced a new partnership with Lyft where the two businesses agreed to share their self-driving technology developments and produce autonomous vehicles that could be tested in real drives with Lyft. 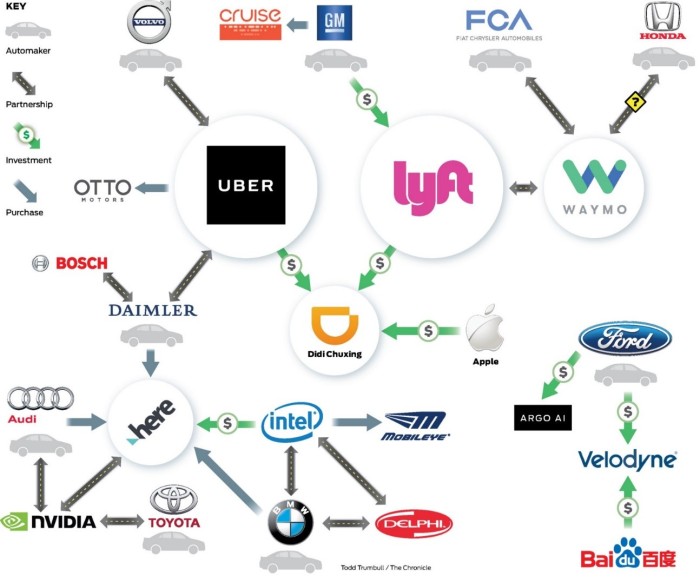 In October 2018, Lyft acquired Blue Vision, an augmented reality startup from United Kingdom. The $72 million deal gave Lyft street level mapping necessary to support AV technology. Lyft also announced that these new technologies will be tested on Level 5 Ford Fusion Hybrid which could be an important step in AV progression.

Lyft has raised a total amount of $5.1bn over 17 financing rounds. A quick analysis of the data provided by CrunchBase shows how the equity valuation of the company has gone up in just a few years, taking as a starting year 2015, for convenience purposes.

In December 2015 Lyft obtained $1bn in investments from General Motors, Saudi Arabia’s Kingdom Holding Company, as well as from other smaller investors such as Rakuten and Janus Capital. At this point Lyft was roughly valued at $5.5 bn.

2017 saw the entrance of Google’s growth capital fund Capital G, Fidelity, Valia Ventures and Ontario Teachers’ Pension Plan as main investors, pouring $1.5bn in two different rounds and valuing Lyft at $11bn, boosted by the rapid extension of application coverage that started from 56% of Americans at the beginning of 2017 and reached an outstanding 96% in October of the same year.

The last big financing round recorded in June 2018, saw an additional investment from Fidelity and Senator Investment Group with $600 million, pushing its valuation to $15.1bn, which is also the estimated value of the upcoming IPO.

After Uber’s announcement of an anticipated IPO sustained by Goldman Sachs and Morgan Stanley, with a potential record valuation of $ 120bn, investors went on considering an inevitable comparison with its nearest and way smaller competitor Lyft, whose IPO will be underwritten by JPMorgan and Credit Suisse.

The gap in valuations between Uber and Lyft (roughly $ 15bn) mainly lays on their differences in geographical expansions. According to some experts, the fact that Lyft, operates in a smaller and more homogenous area could be an advantage for the firm, as it could lead investors to have more clarity about its potential and profitability development in the future.

On the other hand, Uber’s IPO is probably closely intertwined with the fact that, according to Chief Executive Dara Khosrowshahi, Uber’s target is to have 1bn active passengers and consequently become the “Amazon of transportation”. This inevitably leads us to dig deeper into Uber’s larger goals since it is planning to invest significantly in pool technology and mass transit. In addition to all the available services, they will soo­n offer public transit tickets and rental cars through their app. Furthermore, Uber executives also have visions for the future relating to self-driving vehicles, short-range electric aircrafts and delivery drones. Therefore, Uber’s goal is to develop four or five multibillion-dollar revenue streams to keep Uber growing for the next couple of years and this IPO is supposed to lay the foundation for achieving it.

Despite the differences in size and reach, the two of them will inevitably compete for the same pool of investors and timing could determine an advantage for Lyft. By going first, it can benefit from the doubt of the first comer and diminish risks of comparisons, rising due to the recent release of Uber’s quarterly financial results.