Elliott Management Corporation is an activist hedge fund and manages two multi-strategy investment funds which combined have approximately $35 billion of assets under management. Its flagship fund, Elliott Associates, L.P., was founded in 1977, making it one of the oldest funds of its kind under continuous management. The Elliott funds’ investors include pension plans, sovereign wealth funds, endowments, foundations, funds-of-funds, high net worth individuals and families, and employees of the firm. Elliott is run by Paul Singer and acquired a 9% stake in Athenahealth in May 2017 via its Evergreen Coast Capital private equity arm, which focuses on technology investing.

Veritas Capital is a New York-based private equity group with some $10 billion of assets under management. The firm seeks investments in companies that provide critical products and services, primarily technology and technology-enabled solutions, to government and commercial customers. Its industrial focus is on aerospace & defense, healthcare, technology, national security, communications, energy, government services, and education industries. Veritas seeks to create value by strategically transforming the companies in which it invests through organic and inorganic means.

Veritas has a proven track record of driving growth for companies within the healthcare technology space, as illustrated by the firm’s acquisition of Verscend Technologies and its combination with Cotiviti Holdings, as well as the firm’s investment in Truven Health Analytics.

Moreover, the private equity fund purchased the GE Healthcare unit (Virence Health) in July for just under $1.1 billion, which it intends to combine with its new acquisition.

Founded in 1997 and based in the US, Athenahealth is a provider of electronic healthcare record and medical billing software and partners with hospital and ambulatory customers. The firm offers medical record, revenue cycle, patient engagement, care coordination, and population health services. Its network consists of more than 120,000 providers and approximately 117 million patients.

Athenahealth was one of the biggest beneficiaries of Obama-era rules that required doctors to use electronic medical records rather than paper files. But many of the systems used to meet those requirements are seen as clunky and imperfect and vulnerable to disruption from better technologies that use big data and artificial intelligence to help guide physicians.

The deal comes five months after Jonathan Bush, a co-founder of the company, resigned as chief executive after damaging revelations surrounding his personal life. He had been embroiled in a bitter tussle with Elliot Management, which was trying to boot him out of his role, arguing he was mismanaging the company.

Despite the initial fears and uncertainty over president Trump’s policies on drug pricing and healthcare regulations, the broader healthcare industry has witnessed a buoyant 2017 in terms of M&A activity, with total transaction value summing up to $332 billion in slightly more than 3000 completed deals. An important chunk of these transactions has been completed by Private Equity actors, which have poured more than $42 billion in the healthcare sector, the highest level seen since 2007. 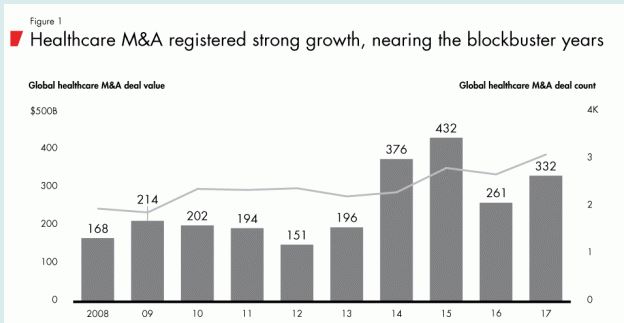 The compelling case for investing in healthcare companies seems to be supported by the robust fundamentals of the sector: an increasingly aging population, the widespread presence of chronic diseases and the immense progress in the research and development of new drugs and medical devices.

As healthcare companies are rushing to embrace technology, one of the subsectors which seems to benefit from the highest level of attention and has been the highest growing profit pool in the past years is the healthcare software market. This sector comprises companies which are involved in some of the following areas: medical record keeping, networking and content management solutions, medical practice management, software for medical research and analysis as well as software for operating medical instruments or devices etc. These solutions are extensively starting to be used by hospitals to store and manage vast amounts of clinic or non-clinic data instead of using the tedious manual records. The healthcare software market is projected to grow at a CAGR of around 15.5% for the next five years. Currently, the most important players in the industry are: McKesson Corp. ($24.21 billion Market Cap), Cerner Corp. ($19.07 billion Market Cap), Allscripts Healthcare Solutions ($1.8 billion Market Cap) and Athenahealth ($5.34 billion Market Cap).

For Veritas, a government and technology-oriented firm, the acquisition of Athenahealth not only fits perfectly the investment strategy of the company, but also comes as a natural continuation of its recent string of acquisitions. Indeed, in the last 5 years the private equity firm added several health IT companies to its portfolio such as Truven Health Analytics in 2012, Verscend Technologies in 2016, and Cotiviti in 2018. Moreover, Veritas, beyond bringing a strong consumer focus and a drive for growth through R&D and product innovation, has a proven track record of driving growth for healthcare technology companies and has a deep understanding of the urgent need of digitalization required by the healthcare system.

The strongest driver and rationale for this acquisition is undoubtedly represented by the combination that, following the deal’s closing, Veritas and Evergreen (Elliot’s private equity arm) expect to carry out between Athenahealth and Virence Health, the GE Healthcare value-based care assets that Veritas acquired earlier this year. The combined entity, as declared by the acquirers in a press release, is expected to be a leading, privately-held player within the Healthcare IT industry with a broad network of customers and a world-class offering of products and solutions. In addition to that, the acquirers see the possibility of realizing a great return from this investment as they believe that in recent years the company has been mismanaged and failed to grow at its full potential.

As far as the combination with Virence is concerned, Athenahealth definitely represents a great strategic fit. Indeed, the company is one of the largest and most connected providers of networks in the nation. Moreover, Virence and Athenahealth have differentiated and complementary portfolios, highly-talented employees, strong relationships with their respective consumer bases and they both share and encourage a culture of commitment and innovation. As a consequence, the combined company is expected to leverage these resources and capabilities to quickly establish itself as a leading player in the industry by providing superior value to customers.

The acquisition was also highly welcomed by Athenahealth’s management and shareholders as remarked by the company’s Chairman Jeff Immelt who said “The agreement with Veritas maximizes value for our shareholders. […] Combining with Virence will create new opportunities for collaboration and growth. […] Operating as a private company with Veritas’s ownership and support will provide Athenahealth with increased flexibility to achieve our purpose of unleashing our collective potential to transform healthcare.”

In conclusion, the acquisition has a solid rationale represented by both financial and strategic drivers and despite being a relatively small transaction it truly has the potential of transforming and shaping the future of healthcare.

On November 12th, Veritas Capital and Elliott Management agreed to buy Athenahealth for $5.7bn in cash. This deal values Athenahealth at $135 per share, a premium of 12.2 percent to the stock’s closing price of $120.35 on Friday. The deal also represents a premium of approximately 27 percent over the company’s closing stock price on May 17, 2017, the day prior to Elliott Management Corporation’s announcement that it had acquired an approximate 9 percent interest in the company. Shares of Athenahealth were up 9.7% on Monday.

The deal occurs after a year of uncertainty for the company which underwent a series of dramatic changes, including the removal of its longtime chief executive Jonathan S. Bush and the nomination of Jeff Immelt as executive chairman.

Elliott, which currently owns about 9% of Athenahealth, will hold a minority stake via its Evergreen Coast Capital private equity arm. Elliot approached Athenahealth in May, a year after taking a stake in the company, offering to take the company private at $160 per share.

Following the closing, this new acquisition will be merged with Virence Health, the companies said in a joint statement. The combined company is expected to operate under the Athenahealth brand and be headquartered in Watertown, Massachusetts. Virence Heath Chief Executive Officer Bob Segert will run the company.

The transaction is expected to close in the first quarter of 2019 and is subject to the approval of the holders of a majority of Athenahealth’s outstanding shares and the satisfaction of customary closing conditions and regulatory approvals. The athenahealth Board of Directors has unanimously approved the merger agreement.