Activision Blizzard Inc. will buy the British developer King Digital Entertainment for a nice $5.9bn settled entirely by cash. The rationale of the deal seems to be twofold: operating and financing based. The combined company is expected to be among the most important tech giants worldwide in terms of active users, with more than the better known Twitter, Alibaba, Yelp, Spotify and Netflix.

Activision Blizzard Inc. (NASDAQ:ATVI) [Activision] listed on NASDAQ and headquartered in California, is the world’s most successful interactive entertainment company, focusing on developing console and PC-based videogames. After merging with Vivendi in 2007 and buying themselves out in 2013, Activision Blizzard performed well and achieved non-GAAP double-digit growth.

The company boasts a portfolio of some of the most successful game franchises such as Skylanders®, Guitar Hero® and World of Warcraft® (the leading subscription-based MMORPG in the world with over 10 million players worldwide) and Call of Duty® (among top 10 game franchises ever). These are built for long lifecycles and develop loyal followings and fan bases, which lead to stable and increasing sales. Realising the industry’s future depends more on effectively monetizing long-term customer relationships than purely on game sales, Activision Blizzard has been long experimenting with new revenue streams such as subscription models and more recently “in-app” purchases.

King Digital Entertainment Plc. (NYSE:KING) [King] is a leading interactive entertainment company for the mobile world based in London. Their games have 330 million monthly unique users as of third quarter 2015 across web, social and mobile platforms with 82% of revenues being derived from mobile audience. Although King has created 200 games, it was the hugely popular Candy Crush Saga, and the later Candy Crush Soda Saga that saw the company grow over 1000% in 2013 before it went public. Candy Crush Saga and Candy Crush Soda Saga are ranked within the top 5 grossing games in the Apple App Store and Google Play Store in the U.S, helping to bring in $502 million in gross bookings annually, mostly through “in-app” purchases.

Unfortunately, growth has since stagnated, amid fears it is a one-product company, and the share price has fallen seemingly irreparably below the IPO price. King has set out reduce its dependence on the 2012 Candy Crush franchise by releasing a number of games including Farm Heroes Saga, Bubble Witch Saga 2 and, Candy Crush Soda Saga with varying success.

The current gaming market is hot, and innovation is driving growth: smartphones are faster than ever, allowing gaming companies to develop high quality content while consolidation in the telecom industry is enhancing broadband speeds, resulting in an increased demand for online interactive entertainment. Mobile games worldwide sales in 2015 is expected to close at $36Bn, a 44% CAGR 2012-2015, while sales in 2019 are expected to be closing at $55Bn, a 50% CAGR 2015-2019.

The main future challenges in this industry include capitalizing towards a more diverseaudience, acquiring new mobile customers and improving operational margins.

The ownership structure of Activision experienced significant changes in 2013, when the
company bought back around 38% of the outstanding shares from the major shareholder
Vivendi company. Another quarter of Vivendi’s stake in Activision was acquired by an investor group headed by Activision’s CEO Robert Kotick and Co-Chairman Brian Kelly. As a result, Vivendi currently owns 6% of the shares, while the investor group controls roughly 25% of the company. The rest of Activision is free float.

King completed an IPO on March 26th, 2014, becoming a publicly traded company listed on the New York Stock Exchange. All of its subsidiaries are fully owned by the parent company and/or other subsidiaries of the Group. Unlike Activision, King has only one operating segment, which is in charge of the development and monetization of games. The segmentation is mainly geographically based.

Activision will finalise the takeover through its fully owned subsidiary ABS Partners C.V. [ABS Partners] which will pay $18 a share, totalling $5.9bn of Equity Value, to King’s shareholders. Given King’s total net cash of $0.9bn, the Enterprise Value equals $5bn. The price implies a 20% premium with respect to the pre–announcement closing price (on October the 30th). The two co-founders Mel Morris and Riccardo Zacconi (currently CEO) still own, respectively, 11.3% and 9.5% of the capital and the transaction, implying two multimillion pay-outs of $666m and $561m. The price will be fully paid in cash without resorting to stock delivery; this is not due to the fact that Activision shares are currently cheap (they are in fact among the best performing stocks in the S&P500 for 2015) but the reason is directly linked to the financing of the acquisition. Indeed, the $5.9bn necessary for completing the takeover will be financed as follows: $2.3bn by a syndicated loan granted by Bank of America – Merrill Lynch and Goldman Sachs Bank (which will bear interest at a rate of 3.25%) and $3.6bn by balance sheet cash available offshore the U.S. Using the offshore cash to pay the acquisition will avoid repatriation and taxation of the capital, saving Activision around $1bn of taxes. The $5.9bn valuation means Activision is willing to pay 6.4 times King’s EBITDA2015E ($0.92bn). Bank of America – Merrill Lynch and Goldman Sachs also acted as Activision advisors as well as granting them the loan. King’s EPS equals $1.75 while Activision’s EPS equals $1.47; the transaction will be EPS accretive by 30% (data is TTM – trailing twelve months).

According to the transaction terms, Riccardo Zacconi shall remain CEO of King Digital which will operate separately from Activision. King’s board has been advised by JP Morgan which has provided positive evaluation of the terms proposed. Accordingly, King’s directors unanimously advised the shareholders to vote in favour of the acquisition (indeed, the takeover needs the approval of the shareholders’ meeting). Activision has received irrevocable undertakings from some of the core King’s shareholders representing a cumulative 92% of the capital. The takeover is regulated by Irish transaction laws and is expected to be completed by Spring 2016.
Market reaction was positive: on the day of the announcement King’s share price rallied from $15.54 to $17.85, a 14.8% increase. Activision saw its share price increase 3.6%, from $34.57 to $35.82 versus NASDAQ performance during the same period of 1.8% gain. 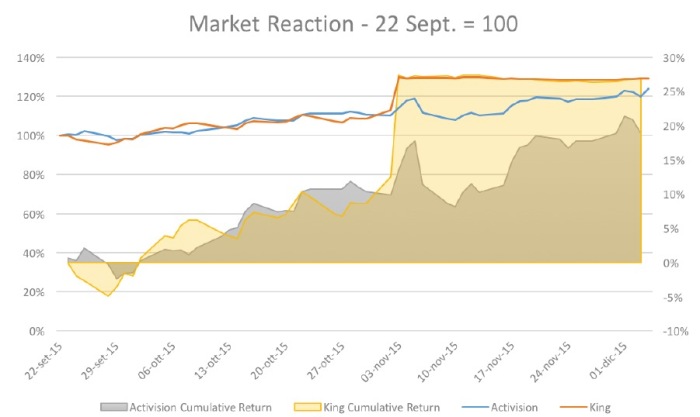 In order to accomplish the merger with King, as specified in the above section, Activision formed the subsidiary ABS Partners. ABS will conduct the acquisition of all of the outstanding shares, thus ending up holding a 100% stake in King. The target will be given high independence and will continue to conduct business as usual as a separate unit of the combined company. The ex-post structure of the company is as shown below:

Mr. Zacconi stated “This is a deal which makes sense for investors and it makes sense from a strategic point of view for the business”.
Therefore, the deal has to be analyzed from two points of view: an operating side – which considers the operating strategy behind the takeover – and a financial side – focused on more investors based matters.

This deal provides Activision with a leading position in the mobile gaming industry and enhances economies of scale across key platforms thanks to its increased base of 547m of Monthly Active Users, 3.64x the number of Monthly Active Users (MAU) of its main competitor: Electronics Arts (150m).
Looking at Activision’s past 3 years Income Statements, we can conclude that addressing resources towards its Licensing (World of Warcraft), Subscription (Blizzard businesses in Russia, China and Taiwan), general Blizzard segments (multi player online role-playing game) and the online distribution would lead to an efficient allocation of capital invested in the business, this is mainly due to the last 4 years’ trends:

Together, Activision could diversify its revenue base, deepening its presence in the mobile gaming market and focus on the online distribution while King would exploit the opportunity to collaborate with a pure content game maker, which could result into a more extensive offering of products, providing reasons to customers to increase their spending (MPU).

The new company is expected to keep a strong balance sheet, also due to the fact that, as previously stated, $3.4bn out of $5.9bn is settled by offshore cash, allowing savings on taxes for cash. The combined company is expected to maintain a good investment grade rating. Indeed, low financial interest expenditure could be a relevant factor when managing investments in different projects: less costs related to projects will lower the hurdle rate needed to pick those, resulting in an increased expected return on invested capital, Nevertheless, internal estimates guarantee this transaction to increase the combined FCFF, while being accretive for EPS of about 30%.
Because of the favorable capital structure of the combined company, which will increase the number of possible projects taken in, this deal will increase the likelihood of an exceptional growth and profitability scenario, key driver of the deal.

The acquisition, even if not astonishing in terms of pure EV size, is changing the playing field in the gaming industry, creating the biggest and probably most efficient competitor among gaming developers. Furthermore, the takeover can start a brand new process of consolidation which aims at solving the recent but highly scaring problem of (I) console based developers not able to definitely step in the mobile market on one side and of (II) mobile developers being just a mass of one – product companies that are born and died in a matter of quarters. We expect this process to create a more stable market view on the industry, with a growth perspective for the former and a more likely long term perspective for the latters.