NOKIA – Alcatel Lucent: an Analysis of the Deal [chapter 2]

Comparison of Nokia and Alcatel – Lucent share prices with the NYSE composite; highlighted the day of announcement.

In the first chapter of this story has been covered the bid made by Nokia to merge with Alcatel – Lucent. It was an all – stock financed transaction for which, assuming full acceptance, Nokia’s shareholders would have owned 66.5% of the combined company while Alcatel – Lucent’s one the remaining 33.5%. The bid was made on April the 15th; at the time of writing, May 6th, first quarter results have been made public and things have slightly changed. In this second chapter we’ll try to be a bit less descriptive while being a bit more analytical. First, we start from a brief overview of the Nokia structure, then we’ll have a look at the quarterly results of the two companies and their impact on the bid; practically, how the recent events could change the way the respective shareholders value the bid and assess whether to agree or not to take part of the deal.

Nokia operates in three businesses, each with its own value and internal accounting:

Despite a general increase in revenues, up 20% year on year to €3.2bn from €2.7bn, the profitability dropped 13% from €305mil to €265mil. As seen before, the Mapping Unit HERE and Nokia Technologies doubled their profitability. It has contrariwise been a tough quarter for Nokia Networks with a 61% decrease in profits from €216mil to €85mil according to the company published reports. Nokia Networks is the division interested in the deal and the one that will merge with Alcatel – Lucent.

The drop in profitability came due to an increase in CAPEX costs, R&D costs and general lower margins in the sector – mainly due to increased competition worldwide. According to Nokia CEO Rajeev Suri:

[CAPEX and R&D costs grew] primarily due to increased investments in LTE, 5G and cloud core.

I remain confident that our lean operating model, ongoing focus on cost management, and the current strength of our portfolio will enable us to meet our 2015 goals for Nokia Networks. The business delivered healthy year-on-year growth even after adjusting for currency fluctuations, although a number of factors in the quarter had a negative impact on profitability. We expect some of these negative factors to ease, particularly in the second half of 2015.

Furthermore, he added that

The CAPEX conditions are challenging at this point, and there is a little bit more competitive activity overall.

Three elements are thus appointed to be responsible for the profitability drop:

The deal come at the right moment and is aimed at relieve the complications affecting the Nokia Networks division; indeed CAPEX and R&D costs should benefit from economies of scale while the deal puts Nokia as the second largest operator worldwide with much stronger power and presence, increasing the gross margin from the actual 33.7% at around 40% or more (sector standard). Suri added that

The strategic logic of this proposed transaction is strong and we believe that it will provide long-term benefits to shareholders of both Nokia and Alcatel-Lucent. We are moving fast on the necessary integration planning, and have already established a structure designed to minimize disruption to our ongoing business.

While the merge would fix some of the problems responsible for the difficulties of the Nokia Network division, the below expectations results shrink the Nokia’s bargaining power. Alcatel – Lucent has not yet published the quarter results (they are expected for May the 7th) but the price of 0.55 Nokia share (NYSE:NOK) per each Alcatel – Lucent share (NYSE:ALU) has been valued according to a profitability of Nokia way above the one expected after the quarter reports. Indeed, the week after the announcement of the profitability drop, Odey Asset Management, Alcatel’s second-largest shareholder, said that it would not tender its shares in the takeover, as the price of the deal was too low.

Nokia has announced that it has agreed terms for an all-stock deal to acquire Alcatel-Lucent and merge the two companies. The combined company is expected to become the second-largest telecom equipment manufacturer in the world, just after the Swedish leader Ericsson and ahead of the Chinese fast growing giant Huawei.

The new company expects a global revenue of €25bn mainly concentrated amid Asia, Europe and North America. Between its clients, some of the world’s largest carriers including AT&T, Verizon, Vodafone, Orange and SoftBank. Nokia will provide them with telecom hardware and software services.

The deal comes at the top of a wave of mergers in the consolidating telecom sector, as anticipated in our TMT industry analysis. 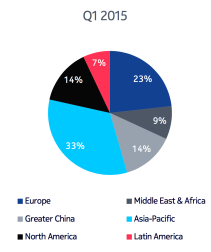 Our opinion is that the takeover can actually ease some of the problem affecting the Nokia Networks, providing a real and sound solution to the profitability issues highlighted in the previous section. The two companies don’t suffer from an overlap of their network coverage. Furthermore Nokia is trying to unload the mapping unit HERE and has received interest from a wide range of possible buyers, from tech companies Facebook and Uber to a German pool of automakers. Selling the mapping unit HERE would free liquidity to cover increased CAPEX and let Nokia concentrates resources on the Networks division and Nokia Technologies, driving the latter in focusing more on its telecommunications linked subdivision, expanding  synergies between the two units.