On Monday 6 March 2017, Standard Life and Aberdeen Asset Management announced an agreement aimed at creating the U.K.’s largest fund manager, through an £11bn ($13.5bn) all-share transaction. Standard Life has a market capitalization of £7.15bn and employs 6,300 people around the world (5,500 in the UK). On the other hand, Aberdeen has a market capitalization of £3.49bn, with a workforce of 2,800 people globally (1,500 in the UK). Through the merger, the two companies plan to rip benefits in terms of profitability, thanks to the larger scale, and, at the same time, cut unnecessary costs.

Standard Life is an investment company headquartered in Edinburgh, Scotland. Founded in 1825, The Life Insurance Company of Scotland was first reincorporated as a mutual assurance company in 1925. 80 years later, the Scottish insurer became Standard Life Plc thanks to a strategic review which further intensified its effort to diversify the business and expand its operations in the asset management industry. Listed on the London Stock Exchange with more than 1.2 million shareholders, the group demonstrates a truly global footprint: it serves about 4.5 million clients across 45 countries and is responsible for the administration of £357bn assets. Moreover, the group has an additional 25 million customers through its Indian and Chinese associate and joint venture businesses, HDFC Life and Heng An Standard Life Insurance Company Limited respectively. Via its dedicated asset management business, Standard Life Investments, the company is in charge of £269bn AUM (as of 30 June 2016) and offers investment solutions entailing Equities, Fixed income, Real estate, Multi-asset, Private equity and, of course, Insurance solutions. Its customers are mainly represented by sophisticated investors such as pension plans, banks, mutual funds, insurance companies, fund-of-fund managers, endowments, foundations, charities, official institutions, sovereign wealth funds and government authorities.

Aberdeen Asset Management is one of the largest European pure-play asset management groups. Formed in 1983 and headquartered in Scotland, the company is listed on the London Stock Exchange since 1991 and manages assets for £302.7bn as of 31 December 2016. While operating in more than 25 countries through its network of 38 offices and investment centers, Aberdeen is particularly famous for its presence in emerging markets. Indeed, not only the company has significant number of funds in Asia but it is also present in South America and Australia. The group serves a wide range of clients, both institutional and private. In particular, its customer base is mainly dominated by Insurance Companies (45%), Open-ended funds (26%) and Pension funds (15%). Moreover, Aberdeen offers a full spectrum of asset classes. Among others, Multi-asset, Active equities and Fixed income investments represent more than 70% of the company’s AUM.

On Monday 6 March 2017, Standard Life and Aberdeen Asset Management announced an agreement aimed at creating the U.K.’s largest fund manager, through an £11bn ($13.5bn) all-share transaction. Standard Life has a market capitalization of £7.15bn and employs 6,300 people around the world (5,500 in the UK). On the other hand, Aberdeen has a market capitalization of £3.49bn, with a workforce of 2,800 people globally (1,500 in the UK). Through the merger, the two companies plan to rip benefits in terms of profitability, thanks to the larger scale, and, at the same time, cut unnecessary costs. 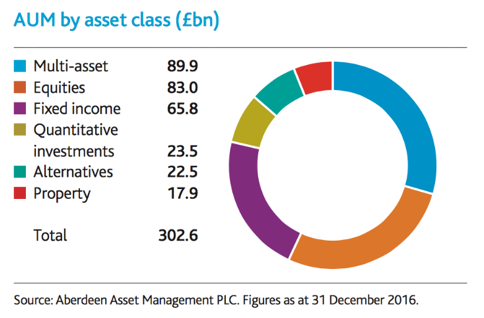 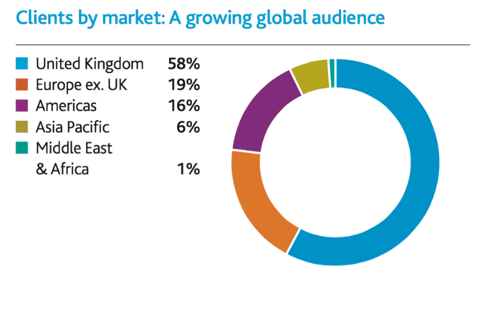 The recommended merger is subject to shareholder, merger control, regulatory and anti-trust approvals. Closing is expected to occur by 3Q 2017.

Credit Suisse and JPMorgan are advising Aberdeen, while Goldman Sachs is serving as financial advisor for Standard Life.

The merger is expected to generate both strategic and financial benefits, creating the 1st active asset manager in the UK and the 2nd in Europe.

The combined entity will achieve scale with over £660bn of AUA and diversify the client base thanks to Aberdeen’s stronger footprint in Americas and Continental Europe. The group aims to capture business in the global market for outsourcing of insurance assets (approx. $750bn btw. 2015 and 2020), thus facing the increasing competition coming from passive asset managers.

A dedicated integration team will target £200m of pre-tax annual synergies to be achieved within three years of completion.

The asset management industry has been facing a strong consolidation trend over the last few years. This trend mainly characterized active strategy asset management companies, and over the last two years, this trend has been particularly strong in Europe. Active asset managers have been facing huge competition from passive funds. In fact, the latter type of investment continuously reported a considerably high growth rate since 2007 compared to more traditional actively managed fund (nearly 4 times higher). As a result of this shifting towards lower costs passive fund, actively managed funds have been facing strong pressure on reducing fees associated with funds and hence the overall costs of running their business. One of the most evident effect of this change of preferences between the two kinds of asset management business model (active vs. passive) was the considerable high net withdrawal of money from actively managed fund towards the passive ones. Of the two firms under consideration, Standard Life faced a £4.3bn withdrawal from its most important fund, the Standard Life Investments Global Absolute Return Strategies Fund, in 2016 and analysts expect other £8bn of withdrawals during 2017; also Aberdeen faced a strong reduction in assets under management facing a £32.8bn net outflows in 2016 (September 2016).

The two most important M&A deals in the asset management industry has been the acquisition of Pioneer Investments by Amundi and the merger between Henderson Group and Janus Capital.

As part of its new industrial plan, in December, Unicredit decided to sell Pioneer, its asset management unit, to Amundi for €3.55bn in an all-cash transaction. Amundi, already the leading asset manager in Europe, after the deal will have a total of 1.21 tn in assets under management, further strengthening its leading position in Europe and becoming the tenth largest asset manager globally.

The other important deal of 2016 in the asset management industry was the $6bn, merger of equal deal, between Janus Capital International and Henderson Group. The new company that will be named as Janus Henderson Global Investors will have more than $ 320bn of assets under management, and it will be able to leverage the different geographic strengths of the two firms, Janus Capital in US and Henderson group in Europe.