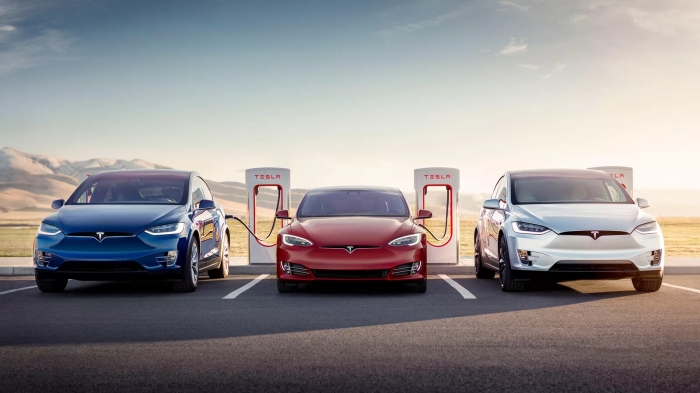 Tesla is an electric-automobile manufacturer, incorporated in 2003 by a group of engineers with the goal to promote the selling of electric vehicles. In 2008 Tesla Motors released its first electric car called “Roadster”. After the former CEO and founder Martin Eberhard resigned in 2007, Elon Musk, who co-founded Tesla Motors, has been appointed as the new chief executive. In 2010 Tesla went public, raising around $226 million. Following this event, Tesla introduced more models. They started to focus on the Model S, the first model with the Tesla Autopilot, a form of semiautonomous driving. In 2012 they started to build charging stations in the US and Europe, before expanding its product line with the Model X in 2015. Because of high demand for more inexpensive electric cars, the Model 3 began production in 2017. Considering the relatively low price of $35,000, there was a lot of demand for the new model, but despite the promising public reaction, Tesla was not able to deliver all the orders in time due to production volumes that surpassed the expectations. The company also breached out into new business areas related to solar energy. In 2015, the company unveiled a line of batteries to store electric power that can be used in both households and firms. In the same year Tesla signed a five-year exclusive partnership with Jeff Dahn, a leading lithium-ion battery researcher, and professor at Dalhousie University in Nova Scotia, aiming to further develop its battery technologies. Additionally, they bought the solar panel company SolarCity a year after. In line with its new strategy to step into new markets, in 2017, the company changed its name from Tesla Motors to Tesla Inc.

Maxwell Technologies was founded in 1965 by Raymond C. O’Rourke, Alan Kold, Bruce Hayworth and Terrence C. Gooding in San Diego, California under the name Maxwell Laboratories. Originally operating as a government contractor, they provided advanced physics, pulsed power, space effects analysis and other research and development services to US military and other government agencies. In the early 90s, the company shifted its focus to commercial applications for its technologies and products. Today, they generate all of the revenues from commercial sources and are a well-established global developer and producer of advanced energy storage and power delivery solutions for a variety of industries and applications. Their ambition is to enable their customers to improve the performance and the value of the products.

Tesla is the largest producer of electric vehicles, but many automotive industry players have recently released their electric car models (Figure 1). While European brands such as Nissan and Renault claim the 3rd and 5th spots, the huge portion of the market is positioned in China, where state-owned firms BAIC, JAC together with Zotye constitute around one-third of global electric cars production.

By country, China and US have the largest number of operating EVs, however on a percentage basis, the leaders come from Northern Europe: 39% of car sales in Norway in 2017 came from electric cars, with 12% for Iceland and 6% for Sweden in the same statistic.

Electric cars use lithium-ion batteries that provide clean energy as opposed to traditional fossil fuels and thus could be the remedy of a massive CO2 omission produced by the automotive industry. However, EV are unable to capture major market shares in other major countries due to some intrinsic problems arising from current battery technologies. They have limited range with industry average around 200 miles per charge, are combustible (e.g. Samsung Note 7 lithium-ion battery exploded during the presentation in 2016) and considerably expensive which raises the price of the whole vehicle. Major industry players have thus been investing a lot to overcome these issues.

In 2018, the Renault-Nissan-Mitsubishi alliance has invested $65 million in Ionic Materials, a startup that created a solid-state lithium battery that lasts longer, is less flammable and cheaper. Most importantly this invention alleviates the issue of recharging electric cars as it can increase distance per one charge from 200 miles to around 1000.

Sweden is looking to overcome the same distance issue by electrifying roads and thus charging the cars while they are driving. The 1.2-mile road to the airport is already being used by electric trucks in Stockholm.

Other startups try to overcome the intrinsic issue of lithium inflammability by substituting to other materials. Israeli startup Phinergy a few years ago introduced aluminum batteries that react to air when exposed to water and thus can run solely on water. In 2018 this startup was acquired by Chinese Yunnan Aluminum and started to prepare for producing such batteries for commercial use. The technology still has issues, e.g. batteries can sometimes momentarily discharge upon turning on, however it is cheaper than lithium-ion and upon success, it would be a revolutionary breakthrough.

American startup Aquion received huge investments from billionaires like Bill Gates in 2017 as it presented technology that created energy using sea water. The startup was then acquired by China Titans Energy Technology Group Co. and is currently trying to apply the technology for storing and transmitting energy.

Tesla EVs can currently run the longest distance without charging – around 500 miles as opposed to usual 100-200 miles in other manufacturers’ cars. However, industry leaders know that their success highly depends on technological advancement and growth. “We are always looking for potential acquisitions that make sense for the business and support Tesla’s mission to accelerate the world’s transition to sustainable energy,” – said of Tesla’s spokesman upon announcement of the deal.

The main Tesla’s target behind this acquisition is Maxwell’s dry electrode technology used to make ultracapacitors. Elon Musk has arguably viewed ultracapacitors as the most promising future of the battery industry since 2013 when he stated such position on Twitter. Ultracapacitors is another technology that can lead to a breakthrough in cost and mass production of such batteries, therefore giving a huge edge for producers not only in the electric vehicles market but also allowing to sell the technology to many other sectors, from smartphones to household items. In a way, the electric car market is no longer an automotive industry but a battery one. Upon successful improvement in battery technology, the producer could create an entire conglomerate of battery-reliant goods.

According to research firm Cowen, Maxwell is a good fit for Tesla as the acquisition will offer synergies in combining Tesla’s current lithium-ion batteries with Maxwell’s ultracapacitors to provide a more stable voltage and frequency thus essentially further improving technology behind Tesla’s electric vehicles. Tesla is looking over an improvement less drastic than Renault-Nissan-Mitsubishi’s bet on solid-state lithium batteries, but significant enough that Tesla could further leap ahead from its competitors in a very near future if no breakthrough occurs in other technologies.

At a time when Tesla is facing an increase in competition while making an effort to cut its costs to improve accessibility, acquisition of Maxwell Technologies contributes to the long-term goal of serving a broader customer base by becoming more price competitive through economies of scale and enhanced product quality.

The deal involves an all-stock transaction valued at $218 million. The offer values a single Maxwell share at $4.75, representing a significant premium with respect to the pre-announcement stock’s price. Tesla wants to obtain all issued and outstanding shares of Maxwell and consequently transform the selling firm into a wholly owned subsidiary of Tesla Inc. The deal has already been approved by Maxwell’s board of directors and is expected to close in the second quarter of 2019 between April and June. Maxwell’s advisors include DLA Piper serving as outside legal counsel, while Barclays Capital has been the company’s independent adviser. Tesla instead, chose the law firm Wilson Sonsini Goodrich & Rosati as outside legal advisor.